Get access to exclusive offers, last-minute deals, special promotions, as well as travel tips! By subscribing you are agreeing to receive email offers and destination tips.
England & Wales

DEPARTURE FROM LONDON: Stance 3, Greenline Coach Terminal, Bulleid Way, Victoria, SW1W 9SH. If coming on foot access is through the building at 4 Fountain Square, 123-151 Buckingham Palace Road, London SW1W 9SH.
The tour departs at 9:15am and returns at approx. 7:30pm on Day 5.

Leaving central London, you travel through Wessex, one of England’s ancient kingdoms.
You pass through this millennia-old setting on the way to the historic city of Winchester. The former capital of Anglo-Saxon England is synonymous with Alfred the Great and boasts a magnificent cathedral and the Norman Great Hall.
From this bustling city, you head to a quieter but equally profound place: the standing stone circles of Stonehenge. A UNESCO World Heritage Site, the Stonehenge site has been skilfully preserved.
At the award-winning visitor centre, you can view the exhibition of hundreds of prehistoric items from the Stonehenge collection. By joining the land train shuttle, you make your way to the world-famous stone circles.
You then travel to Exeter, an important fortified settlement in Roman times and your base for two nights.

Explore the remote windswept magnificence of Dartmoor, where you can see strings of the native ponies grazing close to the striking rock formations.
Dartmoor is also home to an immense diversity of flora and fauna, so enjoy the sights, sounds and smells of the moor’s isolated beauty.
You cross the ancient Clapper Bridge at Postbridge before heading to Tavistock, the historic market town and birthplace of Sir Francis Drake.
Arriving back in Exeter in the early afternoon gives you a chance to explore the city’s ancient riches at a leisurely pace. The city walls, the Norman cathedral, the Royal Albert Memorial, and the Quayside all await you.

Arthurian legend mixes with genuine Celtic history in Cornwall, England’s most western county.
Today, you explore the ancient Cornish capital of Launceston and its 12th century Norman castle.
You head west to the North Cornish coast and the Elizabethan fishing village of Boscastle. Indulge in a cream tea, take a stroll out to the dramatic headland, or learn a spell or two in the Museum of Witchcraft.
You travel to the village of Tintagel and the ruins of its headland Castle, whose romantic cliff top setting is purportedly the birthplace of King Arthur. After lunch, you head to Port Isaac where you can get your Doc Martin’s fix and fall in love with this picturesque fishing village. You then head south to the bustling port town of Falmouth for the next two nights.

Today, we explore the most westerly tip of England. We take a brief stop to look at the island community of St.Michael’s Mount.  We then travel onwards to the unique setting of the Minack Theatre perched above a thundering ocean and the beautiful National Trust beach at Porthcurno.  We visit Land’s End before following a landscape dotted with the relics of the Cornish tin mining heritage, and now a filming location for the Poldark series. St Ives is the final stop of the day with its plethora of artists’ galleries in the maze of narrow, harbour-side streets.  We return to Falmouth for the night.

This morning, you say farewell to Cornwall and travel across Bodmin Moor, a wild moorland that’s designated as an area of outstanding natural beauty.
We’ll take a break before leaving Cornwall and continuing to Glastonbury. Here you can visit the ruins of 7th century Abbey, relax over some lunch or scale Glastonbury Tor for the views across five counties.
From here, you travel back to London, a busy city far removed from the experiences you’ve enjoyed in the magical counties of Devon and Cornwall.

Prices are per person in Canadian Dollars
Exclusions: Lunch, dinner & refreshments. Entrances to all visitor attractions paid locally
Child rate: $939 B&B / $1029 Hotel (under 12 years sharing with two adults)
No departures on Jul 15, Nov 7, Dec 26 & Jan 2.
Luggage is restricted to one suitcase with a maximum weight of 20kg (44lbs.) and one small hand/day bag to go on the coach with you. Unfortunately, Rabbie’s are unable to store excess luggage. 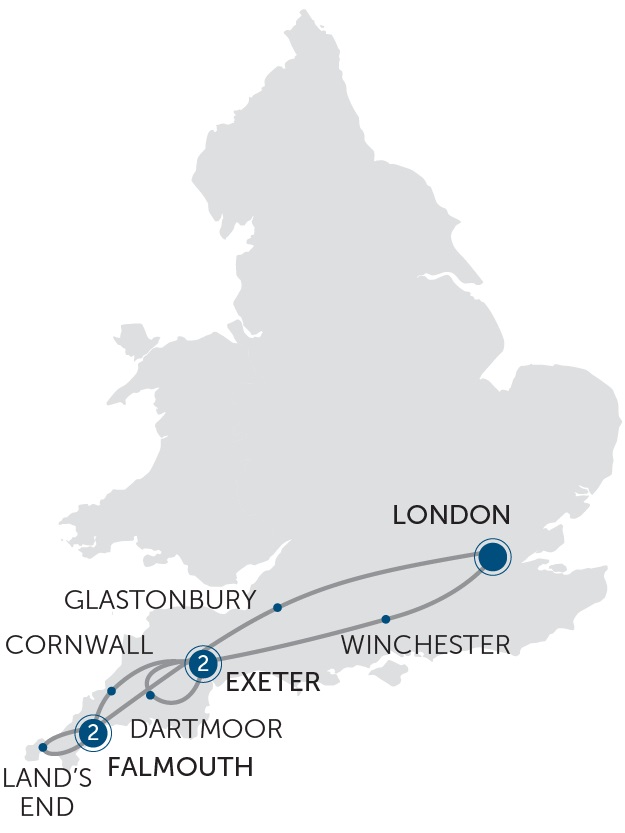