Collect your vehicle and depart from Dublin on this 7 night tour featuring some of Ireland’s most beautiful areas. Explore the famous Giant's Causeway & discover the history of the Titantic in Belfast & catch a glimpse of the stunning cliffs at Slieve League.

Arrive in Dublin airport where you will pickup your car rental.  The villages and small towns of the county are as charming as the city is exciting. Here, within half an hour of Dublin, you can visit stately homes and gardens, or tour the lovely Dublin hills. Watch the sun rise over majestic Killiney Bay; see the fish being landed in the villages of Howth and Skerries and share in the excitement of horse racing at lovely Leopardstown. Sailing in Dublin Bay from Dun Laoghaire, Howth or in the safe estuary of Malahide, is a thrill and you can admire the lovely bay from a sailor’s viewpoint.

Travel towards County Meath which is home to many of Ireland’s most important and historic sites and monuments, and home to Dunboyne Castle, your first overnight accommodation.

Travel north into the lush pasturelands of the Boyne Valley, where you will find Battle of the Boyne Site, Hill of Tara, and Newgrange . The history of the area predates the Pyramids of Egypt with the megalithic tombs dating back to 3000BC. Continue thru’ the Mourne Mountains to Downpatrick, where St. Patrick established his first church in 432 AD.

Belfast is a city rich in buildings from the prosperous Victorian age. It was here that the ill-fated Titanic was built and a memorial to the victims can be seen outside City Hall.  Black Taxi Tours offer a revealing insight into the troubles of the past and the wall mural traditions of each area.

Antrim and the Atlantic Coast

Northern Ireland’s greatest attractions lie along its coast.  These range from the extraordinary volcanic landscape of the Giant’s Causeway to Carrickfergus, Ireland’s best preserved Norman castle.  There are also Victorian resorts like Portstewart, tiny fishing villages and unspoiled sandy beaches such as Benone Strand.  On the road north from Belfast you pass the nine green valleys of the Glens of Antrim leading to the Giant’s Causeway and Bushmills, home of the oldest whiskey distillery in the world.  In Londonderry or Derry as most people call it, you can walk the very well preserved 17th century walls of this very historic city.

This enchanted corner of Ireland lies off the beaten track and is an unexpected wonder to those who venture there. From the quaint charm of Donegal town, with its ruined castle and neat square, to the stunning sunsets at Bloody Foreland, Donegal takes the breath away. All of Ireland has a great supply of physical beauty, and Donegal is no different. Ireland’s most northerly point, Malin Head, is on the Inishowen Peninsula where motorists can take the 160 km drive round and visit Fort Dunree spectacularly poised above Lough Swilly. The other peninsulas to the west offer delightful landscapes of incredible beauty. Deep in a lovely lake adorned valley is the Glenveagh National Park and castle where you can spend an enchanting day. Donegal tweed, renowned and imitated the world over for its texture and design, are a marvel to see being created on the loom, and a great souvenir to take home.

If you are feeling adventurous take a drive out to Slieve League, the highest cliffs in Europe with spectacular views or head into Donegal Town for some great shopping and restaurants.

Leaving Donegal, you will pass through Co. Fermanagh. You can visit the world famous Belleek Porcelain factory on the shores of Lough Erne.  The Marble Arch Caves are one of Europe’s finest showcaves and allow visitors to explore a fascinating, natural underworld of rivers, winding passages and lofty chambers (it is recommended to book a tour in advance to avoid disappointment).  Another option is to visit Florence Court, one of most beautiful Georgian houses in Ulster, nestled against a backdrop of mountains and forests.

Before arriving Dublin, you may also visit Trim Castle, the largest Anglo-Norman castle in Ireland which was the location for the epic movie ‘Braveheart’.

Intimate as a village, sophisticated as a metropolis and friendly as a pub, the capital of Ireland is a centre of infinite interest and variety. Monuments in literature and stone mark the history, writers, poets and people of Dublin. Mediaeval, Georgian and modern architecture provide a backdrop to a friendly, bustling port which can boast literary giants such as Shaw, Joyce, Yeats, Beckett and O’Casey as native sons. Spawned by the need to ford the River Liffey, fortified by the Danes, developed by the Normans, adorned with fine buildings by the Anglo—Irish, the city has grown in stature and elegance over the centuries.

A hearty Irish breakfast in your hotel and then you are free to explore Dublin’s ‘Fair City’ on your own.  A Dublin Bus Hop on / Hop off ticket is an easy way to do this.

Fine museums and galleries chronicle this long and colourful heritage. Fashion shops and boutiques rival the best in Europe. The theatres and concert halls attract prestigious national and international artists, while the pubs buzz with traditional entertainment, cabaret, jazz sessions and, of course, friendly and exuberant Dubliners.

Time to say good-bye to Ireland.  Your private chauffeur transfer will take you to Dublin airport for your return flight.

Prices are per person in Canadian Dollars.
Child rate (2-11 years) when sharing with 2 adults: $899
Upgrade to Super Inclusive Insurance from $150. 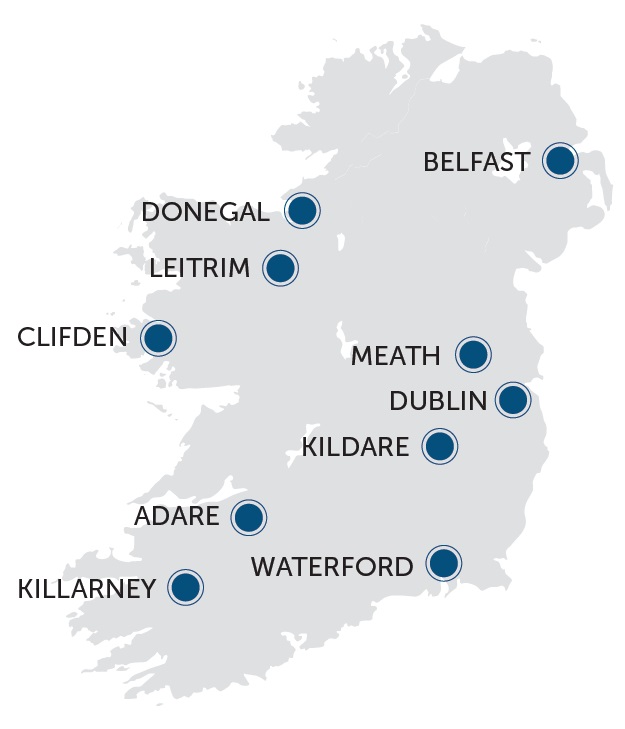