Departures on Saturdays from Dublin

A fabulous 5 days spent searching out the scenic, historic and cultural highlights of Northern Ireland. With everything from the modern history of Belfast to the traditional Gaelic culture of Donegal, taking in dramatic seas cliffs, ancient castles and wonderful scenery, this tour will take you closer to the culture and history of Ireland and Northern Ireland. For a truly authentic Irish experience this is the tour for you!

ONLY 16 GUESTS PER DEPARTURE!

Stay 2 nights in Belfast, 1 night in Derry and 1 night at Kilronan Castle in Roscommon

Departure Point – Collection from the Gresham Hotel in Dublin between 08:30am to 8:45am. Please meet out front of the hotel between these times.
Leaving Dublin this morning, and Ireland for that matter, we head north towards Belfast, located in Northern Ireland.  Enroute we stop at Listoke Distillery to carry out a tour and taste experience.  You will be introduced to the basics of distilling, as well as learn the story of this distillery and the Gin School. Arriving into Belfast we will do a panoramic tour of the Falls and Shankill Roads to learn of the effects The Troubles had on the city and the entire island. Tonight, you’re free to explore Belfast and everything it has to offer. With countless options for dinner you’ll be hard pressed choosing, there’s Robinson’s Bistro which has been offering delicious pub food for over 100 years, or if you’re feeling like treating yourself you can check out Deanes, owned by famed Northern Irish chef Michael Deane.

After breakfast, we make our way to the Titanic Belfast Visitor Centre which was recently voted as the world’s leading tourist attraction. Here you can learn everything about the legendary RMS Titanic, from standing in the shipyard it was built all the way to its maiden voyage and subsequent place in history. When finished up at the centre, you can avail of our transfer to the city centre where the rest of the afternoon is yours. Tonight you will enjoy a delicious supper in The Old Inn, established in 1614 the inn is bursting with character from cozy corners and elegant interiors to the stunning views over the beautiful country park.

Today, we head north along the Antrim Coast for a visit to the famous Giant’s Causeway. Enroute we make a stop in the Glenariff Forest Park at the Glenariff Teahouse for some coffee or tea, with beautiful views of the park, the shop also has freshly baked scones available that are delectable. When finished we continue along the Antrim Coast until we reach the legendary Giant’s Causeway. The story goes that the Irish giant Fionn mac Cumhaill built the causeway to fight the Scottish giant Benandonner, while others claim it was the result of volcanic activity millions of years ago. Whichever story you believe, what remains true is that the Giant’s Causeway is definitely a sight to behold and one that will leave you in awe when you do.

Next, we head to Friels Bar for a light lunch, established in 1837 this bar has a long history and was even used as a soup kitchen during the Great Famine, with the original famine pot still on display. After lunch we head to the  Seamus Heaney Homeplace which celebrates the life and work of the late poet and Nobel Laureate, Seamus Heaney. From here we make our way to the historic walled city of Derry, which was the last walled city to be built in Ireland and the only city whose walls remain completely intact in the country.

This morning we’ll be met by a local tour guide and embark on a walking tour of the city to learn all about Derry’s turbulent past. Then we make our way to Irish House in Donegal, where we will have an Irish coffee and a demonstration of how tweed sweaters were originally made as you watch the threads weave in and out on the old wooden loom.

After our coffees we will make our way to the lovely town of Sligo where you can enjoy lunch and a stroll around town. Next, we head to Roscommon and our final overnight property – one of Ireland’s most luxurious castle hotels – Kilronan Castle. After checking into your room, we will be enjoying a lovely dinner in the Castle, after which you can enjoy a drink or some tea by the fireplace in the stunning drawing room.

After enjoying a leisurely breakfast with time to explore the castle grounds and spa, it is time to make our way back to Dublin.  Leaving Kilronan, we will head to Arigna Mines where you can get a unique perspective into what coal mining life was like in Ireland from the 1700’s all the way to it’s closure in 1990.  Once we make our way back above ground we head towards the ancient village of Kells.  Enroute we will be stopping for lunch in Cavan.  With loads of little cafes and restaurants you’ll be sure to find a bite to eat here. From Cavan, we make our way to our last stop on tour, Kells, part of Ireland’s Ancient East. This olden village was where the famous Book of Kells was written and protected for over 800 years before being moved to Trinity College in the 17th century. This quaint village is part of the reason Ireland is referred to as the Land of Saints and Scholars. When we finish exploring we make our way back to Dublin, where sadly our tour ends.

Prices are per person in Canadian dollars.
Child rate 7-11 years sharing with 2 adults: $999.
Triple rates and rooms on request. 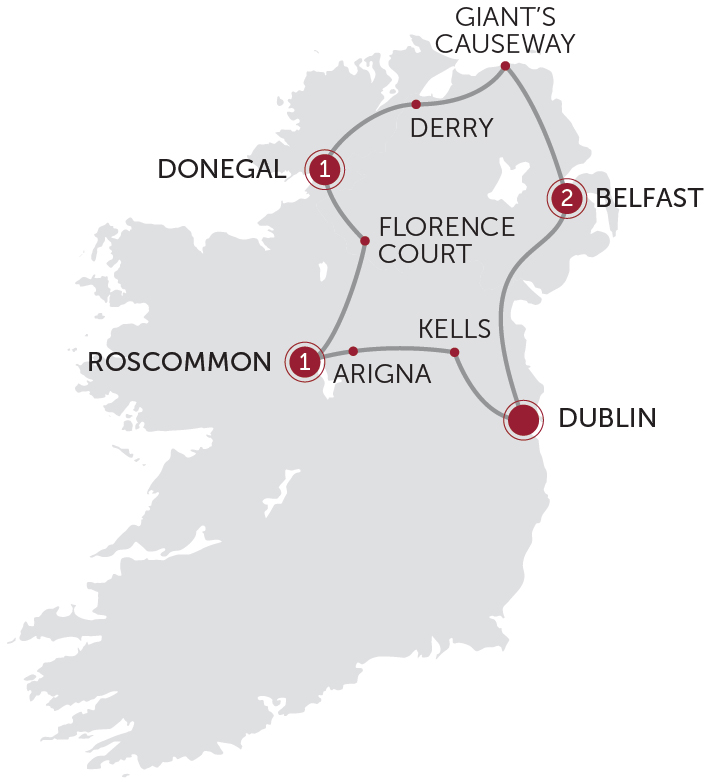