Head north to explore Northern Ireland and the northwest on our most immersive adventure tour yet! Spend 7 days on an unforgettable adventure vacation in Ireland, hiking, horse-riding and sea kayaking your way along the rugged northern coastline. Combine Northern Ireland’s wild outdoors at the Giant’s Causeway and the beaches of Donegal, with the fascinating history of its biggest cities: Belfast and Derry.

SAMPLE ITINERARY
We are proud that no two Vagabond tours are the same. Your own preferences - and the famous Irish weather - mean that the following itinerary should be understood as a framework only. Accommodation options are fixed. We then base each tour around the list of daily stops below. Your guide will discuss options with you throughout your tour and plan accordingly. If there is something that you particularly want to do or see on your tour, mention it to your guide. We will do our utmost to match your choice with the preferences of your group. Activities marked ‘Tour Option’ carry an additional extra cost, but are optional.

Please note, this tour has stops in both the Republic of Ireland (EU eurozone) and Northern Ireland (UK). You will require both Euro (€) and Sterling (£) cash.

YOUR ADVENTURE AWAITS
Dublin to Antrim

Meet your VagaGuide and fellow Vagabonds at reception of the Grand Canal Hotel in Dublin on Sunday at 8.20am. Board your 4x4 VagaTron tour vehicle and hit the road!

Zoom to Belfast, the vibrant capital of Northern Ireland.

Your accommodation and dining for the evening is at the Londonderry Arms. This quaint former coaching inn once played host to none other than Winston Churchill himself.

Next up is the challenging and scenic Dunseverick coastal hike. This steep, often muddy trail, culminates in your arrival at the UNESCO World Heritage Site of Giant's Causeway. Duration: 2 hours 30 minutes.

Science tells us that the Giant’s Causeway was formed millions of years ago when volcanic magma cooled into 40,000 hexagonal basalt columns. Irish folklore, on the other hand, tells a different story. According to the legend, Finn McCool and his giant-fighting ways are to blame!

We hope you're thirsty! Visit Bushmills, the oldest licensed whiskey distillery in the world (Tour Option - £7 per person).

We’ll grab a photo stop at the iconic clifftop stronghold of Dunluce Castle before passing through historic gates to enter the city of Derry/Londonderry.

NORTHWARD, EVER NORTHWARD!
Derry to Donegal

Start the day with a guided historical walking tour along the walls of Ireland’s only fortified city, Derry/Londonderry (Tour Option - £4 per person).

Cross the border back into the Republic of Ireland and the euro currency zone (€).

Panoramic 360° vistas await you at the beautifully preserved Celtic stone ringfort at Grianán of Aileach.

Inishowen is Ireland’s most northerly peninsula. Jump in a sea kayak and paddle your way around its rugged coastline, exploring caves, cliffs and deserted beaches (Tour Option - £50 per person). 3 hour duration.

Expect a turf fire and a warm welcome at this evening’s accommodation, the locally-owned Arnold’s Hotel of Dunfanaghy.

FORTRESS OF THE FOREIGNERS
Dunfanaghy to Ardara

Today is yours to design. Flexible activities abound in one of Ireland’s most remote and beautiful regions.

Your guide can organise one of the following activities:
● Surf Dunfanaghy beach, right in front of your hotel (Tour Option - €35/45 per person)
● Enjoy a guided tour of Doe Castle on the shores of Sheephaven Bay
● Scenic drive and hike to the stunning cliffs of Horn Head

The pristine wilderness of Glenveagh National Park is next. Keep an eye out for wild deer and eagles as you explore enchanted woodlands, lakes and glaciated valleys.

This evening’s accommodation is at the family-owned Nesbitt Arms in Ardara.  Your stay in Ardara is a great opportunity to sample live Irish music. Talented musicians regularly perform in venues around this small town.  Also highly recommended is a visit to Eddie Doherty’s weaving studio. Friendly and informative, Eddie is one of Ireland’s few remaining handweavers.

Look out for hardy hill sheep and epic views as we journey up and over the Donegal mountains.

At the towering sea cliffs of Slieve League, your guide will offer these options:
● Get up close and personal with some of the highest sea cliffs in Europe, on a 1 hour 30 minute hike over steep and rugged terrain.
● Take a guided boat trip under these dramatic 600m/2000ft cliffs (Tour Option - €20 per person). You’ll be on a small 12 person capacity boat.

Stop by Donegal town, with the option for a guided tour of 15th century Donegal Castle.

Accommodation tonight is at the stunning Mount Falcon Estate. Enjoy delicious food, a romantic woodland setting and a wealth of history.

Ease yourself into the penultimate day at the magnificent Rosserk Friary, a ruined Franciscan monastic site on the Atlantic shoreline.

Explore the dramatic cliffs and sea stacks of northwestern Mayo, one of Ireland’s most remote and windswept corners. Downpatrick Head feels like the edge of the world!

Experience the vast, unspoilt wilderness of Ballycroy National Park, a haven of serenity.

Crown your day, biking or hiking on the dedicated off-road trails of the Western Greenway (Tour Option - €30 per person). Stunning views of Clew Bay are in store along this converted railway line. E-bikes available.

Your accommodation tonight is at the centrally-located Wyatt Hotel in Westport.  There’s a distinct probability of live music and good food this evening in Westport. Don’t miss this colourful town’s rich array of authentic Irish pubs.

THE PARTING GLASS
Westport to Dublin

Before we wave goodbye, there’s still time to take in some of Ireland’s highlights.

Lose a sin with every step on the holy mountain of Croagh Patrick. Nearby lies the ruined 16th century Murrisk Abbey and the National Famine Memorial.

Turning for Dublin, we’ll be faced with a choice:
● Discover Ireland’s rich rural heritage at the Museum of Country Life’s modern exhibition space and Victorian landscaped gardens.
● Or unearth the Iron Age trackway, or togher, at Corlea. Constructed circa 150BC, this is the largest prehistoric roadway in Europe, hinting at a sophisticated pre-Christian society.

You’ll disembark your VagaTron 4x4 tour vehicle back at the Grand Canal Hotel in Dublin between 5-6pm. Farewell hugs all round for your new friends.

The average driving time today is 4 hours and 30 minutes.

Prices are land-only per person in Canadian dollars.
Unfortunately children 8 years and under are not permitted. Children over 9 years are not discounted, must pay adult rates.
This is a sample itinerary only. Due to flexible nature of this tour itinerary may vary. 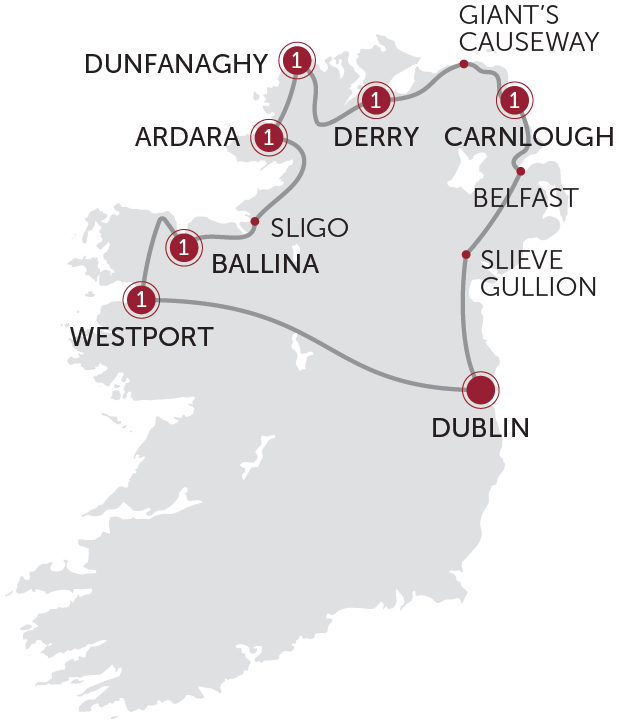