Dublin needs very little introduction as a city. The capital of the Republic of Ireland is world famous for its history, literature, pubs, restaurants, music and more. In short, it’s a must-see destination not just on itineraries to Ireland and the UK, but also on visits to Europe.

The choice of everything in the capital is vast, but a superb place to base oneself during a stay is Clontarf Castle, on the city’s northside, located in close proximity to the coast of Dublin Bay.

The castle was originally built in 1172 by Hugh de Lacy as part of an inner circle of defensive structures to defend the city against attack. 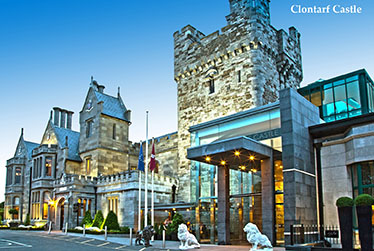 The castle is also built near the site where the Battle of Clontarf took place in 1014 between the forces of the High King of Ireland Brian Boru, and Máel Mórda, the King of Leinster, who was backed by Vikings from Dublin, the Orkney Islands and the Isle of Man. Both sides were fighting for control of Leinster, and in turn control of Ireland.

The battle came to a close when Mórda was killed and his army was defeated. However, Boru was also killed, meaning that following the battle, the country found itself without a leader, and fell into a pattern of smaller tribes fighting for control of various parts of the country over the subsequent years.

It’s a famous battle in Irish history, and one worth finding out more about. Indeed, the hotel arranges tours of the local area, which focus on the battle in particular.

The Viking and medieval history of Dublin is also examined in close detail at the city centre museum Dublinia, which is worth a visit to gain an understanding of the time the Scandinavian warriors exerted control in Ireland.

Back in the present day, a fourth-floor room at Clontarf Castle gives a splendid view out across the city. Modern day Dublin’s docklands, red-brick homes and the city centre gleam out in the distance, and begin to make one think of the many lives that have been lived, and that are being lived at that very moment, across the metropolis.

A fine way to get a grasp of that history of Dublin’s people is by visiting the Glasnevin Cemetery Museum, also located on the northside of the city. 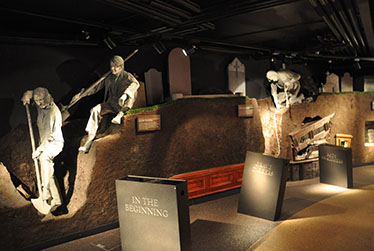 The museum was named European Museum of the Year in 2012 and represents a way to get a handle on some of the famous Dubliners who are buried here.

As well as charting the early days of gravediggers and graverobbers, the museum also details the members of the Irish rebellion that are buried here, which includes Michael Collins and Eamon de Valera.

There is also a very large section dedicated to the Catholic emancipator Daniel O’Connell. In addition to introducing Catholic emancipation, O’Connell was lauded as an abolitionist and radical, making him one of the most respected and renowned figures in Irish history.

Indeed after his election to parliament, he decreed that Dublin needed a non-denominational cemetery, and Glasnevin Cemetery was spawned as a result. O’Connell takes pride of place in Glasnevin, buried in a crypt beneath the O’Connell monument, which is a round tower just inside the main gates of the cemetery.

Tours of the cemetery’s most famous graves are run daily at 1130 and 1430, and are a good additional attraction to do as well as taking in the museum.

The National Botanic Gardens can also be accessed through a side gate of the cemetery. The greenhouses there are home to a staggering variety of tropical flora, while there is also a wide variety of native nature, kept in pristine condition, to be seen.

The city centre of Dublin is the city’s greatest gem; however, and the list of attractions to be seen there are many. A day or two walking around sampling museums, bars and restaurants is perhaps my favourite thing to do in the city.

The National Gallery holds a superb collection of art that includes works by Caravaggio, Turner, Picasso, Vermeer and Yeats.

In addition to the art on offer, the building itself is a collection of wings from different eras that also evoke different architectural periods.

My personal favourite is the Millennium Wing, designed by Benson and Forsythe. Its clean lines and angled walls make an apt home for some of the world’s greatest pieces of art.

You could also undertake a walking tour of the sights of the city to get a handle on the layout and see some of the main attractions.

Starting on the northside, Henry Street is one of the city’s premier shopping districts and a good place to get the credit card out if that is your fancy.

While at the end of Henry Street is The Church Café Bar. The beautifully restored building is one of Dublin’s oldest galleried churches and a great place to absorb some 18th century architecture while grabbing a bite to eat or a pint of Guinness.

Indeed, sipping on a pint of Guinness is a favourite pastime in Dublin and there are countless places in which to do so.

Another of the best spots to take in is The Horseshoe Bar just off St Stephen’s Green, a side bar to the salubrious Shelbourne Hotel. U2 frontman Bono often takes a drink here, which is as good a recommendation as any.

Just around the corner from St Stephen’s Green is another Georgian square  – Merrion Square. Both are beautiful, green lungs in the heart of the city, and portals back to the Georgian era of the town.

Dublin’s Oscar Wilde statue can also be seen in a corner of Merrion square, opposite the home he lived in from 1855-1878. 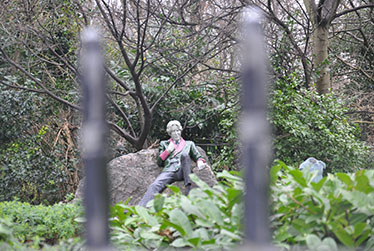 A short walk from Merrion Square is Grafton Street, along with Henry Street, the main shopping hub of the city, with designer brands to beat the band.

A must-see Grafton Street attraction is Bewley’s Café, one of the city’s most famous, and oldest, eateries. Grab a coffee on the balcony level and watch the world and his wife go by outside.

Another great place to do a spot of shopping, or eat and drink, is the George’s Street Arcade. Built in 1881, it’s Europe’s oldest shopping centre and today houses an eclectic mix of eateries, clothes, book, record and bric-a-brac stores.

Among the best on offer inside is Worscht – a gourmet sausage café. Ireland is famous for the humble sausage and the quality at this establishment is excellent.

A few doors up from Worscht is a side entrance into the adjacent Market Bar, a converted market which now houses an upmarket tapas and wine bar.

If you want things a little more low key, just opposite the entrance to the Market Bar is Little Mac’s, Ireland’s oldest fast food stall.

For coffee, Simon’s Place is the stop shop for a brew. Listed in the McKennas’ Guide for 2014, this place is an institution that has been serving up great coffee and cake for years. 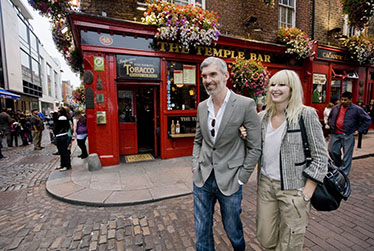 Cross over from there into Temple Bar and you’ll find the Irish Film Institute, where you can catch the latest European arthouse flicks.

The restaurant and bar are both good here, and you might even spot a celeb while there. Aidan Gillen (The Wire, Games of Thrones) and Jim Sheridan (My Left Foot, In the Name of the Father) were both there last time I visited.

The IFI building itself is also a fine example of old and new Irish architecture combining. The original structure was a Quaker meeting house dating from 1692, but is now a wonderful mélange of old brick and more modern glass and steel.

If you watch a film in the IFI, the must-eat venue is around the corner in Meeting House Square at Il Baccaro. 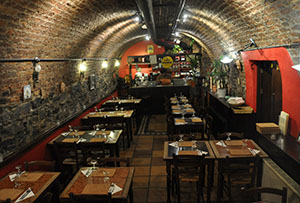 Housed in an old warehouse, it’s a very unique dining experience. Incidentally, if you look up and across the square when outside you can see the Gaiety School of Acting, where Colin Farrell, among others, learnt their trade.

One of the better venues to catch some live acting in the city is the Project Arts Centre, which is also in Temple Bar. They have a constantly revolving selection of modern theatre.

Or, if art is more your thing than acting, the National Photographic Archive and Temple Bar Gallery both house rotating exhibitions, which have free entry. If you plan ahead, there are also opening nights at which you can meet the artists.

As mentioned earlier, Il Baccaro is a fine dining spot. A few other options in Temple Bar are The Chameleon: around since 1994, they serve up Indonesian food, and are regarded as one of the best outlets for vegetarian fare in the city.

If you want to keep it more Irish, Boxty House serves a traditional Irish menu, including stew and seafood chowder.

As well as those lesser-known attractions, the world famous Guinness Storehouse, and the Jameson Distillery, are both worth popping your head into it. They have great tours and also explain in detail how stout and whisky, respectively, are made.

The 1916 Rebellion Walking Tour, run by Lorcan Collins, is also a good option. The tour gives an outline to the Easter Rising, during which Ireland was first declared a republic, and visits the sights where the rebellion took place around the city.

And of course, a trip to Dublin is incomplete with visiting the world-famous academic institution Trinity College. Walk across its cobbled streets and get a feel for old-world academia.

While you’re there you can also view the 9th century Book of Kells. An ornate gospel manuscript created by Irish monks and housed in an 18th century library.

With all that history and culture seeped into one’s mind, retreating back to the beautiful mix of old and new design that is Clontarf Castle is a good way to relax and reflect upon what you’ve seen. 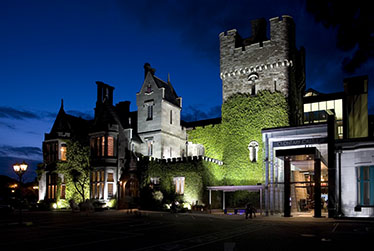 The exterior of the castle is intact, and much of the inside has an old-world feel, but a facelift with a modern tinge gives the building a wonderful mélange of modern and ancient, where glass and stone collide to create a homely, yet elegant hotel, which is situated merely ten minutes from the city centre and the heart of the action.

Fahrenheit Grill, the hotel’s restaurant, serves traditional European fare, with the rib-eye steak and confit duck particular highlights. Or you can dine at the hotel’s more low-key Knights Bar, perhaps grabbing a buffet lunch there in the afternoon.

If you fancy a few pints of the black stuff nearby then two choices spring to mind. Harry Byrnes on the Howth Road is one of Ireland’s best bars and serves a mean pint of Guinness.

While on Clontarf Road, The Yacht looks out over Dublin Bay, and former Ireland rugby legend Brian O’Driscoll is a customer you might bump into while there.

Dublin’s a great city, and it really is only getting better with age. Grab a piece of it for yourself.

The National Gallery of Ireland