The Ring of Kerry

Travel Southwest by Train
An all day tour offering a unique opportunity to experience the world renowned Ring of Kerry, with its overwhelming mountains and seascapes. On this tour there are views of the Skellig Rocks (islands), where Star Wars 'The Force Awakens' was recently filmed.

Check-in is 20 minutes prior to Train Departure Time.  Customer Service Desk at Heuston Station where our Check-In representative will be in their yellow jacket!

Check in for 07:00 departure from Dublin Heuston Station, opened in 1844 as the headquarters of the Great Southern & Western Railway and is now the official principal station of Iarnród Éireann, Ireland’s national railway company. As your train departs, we travel in a south westerly direction, through Dublin's western suburbs and then through the lush fertile countryside of Co. Kildare. Our journey takes us through the Curragh which is famous for its racecourse, home of the Irish Derby, and there are many stud farms in the vicinity. Look out for the best of Irish bloodstock training on the Curragh plain as we pass. We continue our journey to the Southwest through Portlaoise, Thurles, Limerick Junction, Charleville arriving at the junction station of Mallow where we change trains to Killarney. You don't need to worry about this change as you will be fully escorted from Dublin all the way to Killarney by our Railtours Ireland First Class host.

On arrival in Killarney Station you will be shown to your seat on the motorcoach for your tour of the spectacular Ring of Kerry.
There are plenty of stops along the Ring of Kerry for morning tea, lunch and photo stops etc. Ireland’s highest mountains are located in Kerry and Carrauntouhil, which can be seen en route. It is the highest, standing at 1041 metres. We will make a stop at the Kerry Bog Village Museum, which gives people an insight into how people lived and worked in rural Ireland in the 18th century. The village is the only one of its kind in Europe. Later on the approach to Waterville there are views (weather permitting) of the Skellig Rocks (islands), where Star Wars 'The Force Awakens' was recently filmed. We will make several photo stops, a stop for lunch and one final stop at the pretty village of Sneem, for about 30 minutes, or as directed by your tour leader.

An essential part of any visit to Ireland, this tour circles the magnificent MacGillycuddy Reeks and runs through its many passes and valleys along the shores of Dingle Bay and Kenmare Bay. There is an unspoilt nature to Ireland's most beautiful region and the Ring of Kerry provides many unforgettable memories as it passes through the many picturesque villages such as Glenbeigh, Waterville and Sneem and returns via Ladies View, the famous Lakes of Killarney and through the Oakwoods of Killarney's magnificent National Park. At the end of the tour you will be brought to the railway station at Killarney. 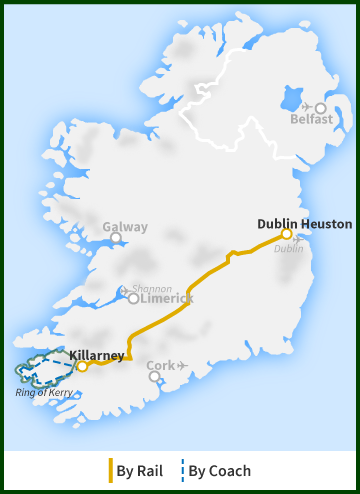